Includes an Index to places on the map and enlargements of Dublin and Belfast. Reverse side includes Tourist Information, Plan your activites information, Regions of Ireland, Road Signs and a Distance Chart. 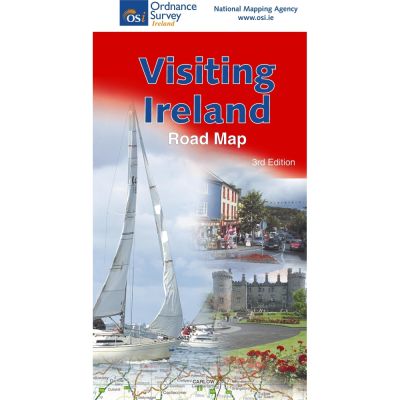 All the main motorways and also the ferry routes are marked on the map along with the railway lines.

Detailed enlarged access maps to Dublin and Belfast are shown.

An alphabetical index of towns and cities is shown on the map.

A distance chart is shown for planning of your route.

Information on Speed limits, Signposts for the Republic of Ireland and also for Northern Ireland along with the relevant Speed Limits for each area.

Of particular interest on this map is the suggested tours of Ireland.

Included are several areas including the Wild Atlantic Way, Ring of Kerry, Ireland’s Ancient East and the Causeway Coastal Tour.

At each section along the various routes there are attractions to visit with plenty of activities included for each visit.

The many beaches around the coast are marked on the map.