Lough Ree. The Adventure Series is an activity oriented map which shows detailed landscape information. It provides detailed mapping in specific locations for the outdoor enthusiast such as mountaineers, hill walkers, cyclists and other users of the Irish countryside. 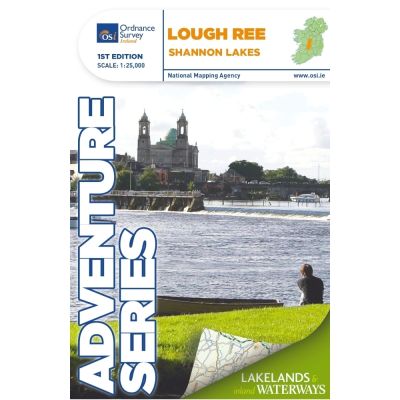 This map is located in County Roscommon and County Longford and also a portion of County Westmeath. The N6, N61 and N55 are shown on the map. The N63and R392 go  through Lanesborough.

The major towns are Lanesborough, Athlone and Glassan. The central area of Athlone, centered  on Church Street, is reproduced as a detailed insert.

Roscommon town is also shown as an insert, indicated with a red line AB, with the access roads to the town shown.

The River Shannon flows through Lanesborough then into Lough Ree and past the numerous islands, to arrive at Athlone where it then heads south again.

Numerous islands are dotted along the lake from the larger Hare Island to the tiny islands e.g. Dogs Island, Goose Island, Crow Island and Kids Island.

Bays feature along Lough Ree and among them are Portrunny Bay, Blackbrink Bay and Hodson’s Bay.

At the southern of the map the Shannon River flows through Athlone. An additional feature feature of this map is the large number of bogs which are spread out throughout most of the map.

Boat hire is a major activity on the Shannon River. Water sports and activities are the emphasis of this map with additional information provided for activities on the river. Navigation Channels and Navigation Markers along with Slipways, Mooring Points, and Locks are just some of the additional features on this map series.

Two Discovery maps 1:50 000 also cover this area with sheet 40 covering the northern part of the map and sheet 47 covering the southern part.