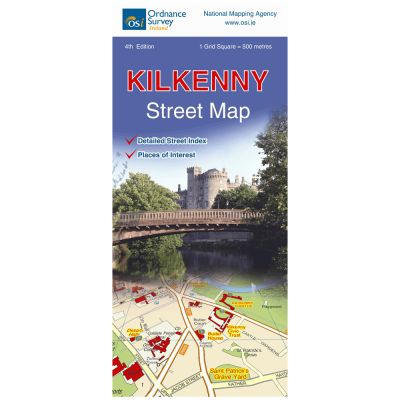 The railway station, McDonagh Station, is close to the city centre.

This map stretches from Neworchard in the north to Danville in the south and Greenridge in the east to Palmerstown in the west of the city.

Kilkenny is very well served with business and industrial parks with easy access to the ring road.

There is a separate list of places of interest.

The River Nore flows through the city and is joined by the smaller River Breagagh and River Pococke  which flow into the River Nore. A feature of the River Nore is the numerous weirs along the river.

Tourism is a major feature of the medieval Kilkenny city. There are numerous visitor attractions to visit in the “Marble City”. Kilkenny Castle and grounds offer the visitor an opportunity to relax and wander around the extensive parklands surrounding the castle. Behind the castle is the canal walk which runs close to the River Nore.

On the opposite side of the river is the Lacken Walk.

Rothe House was built between 1594 and 1610 and was the home of the Mayor of Kilkenny city, John Rothe Fitzpiers his wife and family of eleven children and is a very popular attraction.

Among the more unusual features of Kilkenny is the Newpark Fen which is an ecopark.

The Peace Park stretches along the river Nore in the city centre.