Ireland West. This map covers the West of Ireland and contains detailed road information and tourist features, such as caravan parks, picnic areas and information offices. (This product is produced with the co-operation of Ordnance Survey Northern Ireland, OSNI). 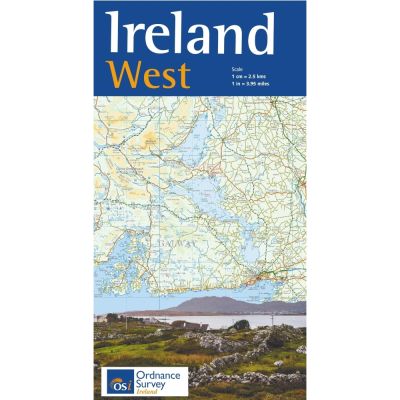 This map includes Galway City, Limerick City, and the towns of Ennis, Nenagh, Tuam, Castlebar, Castlerea, Roscommon, Ballina, Sligo and Bundoran. Motorways are included; the M7 and M20 around Limerick, the M18 reaching north to Gort, and the M6 connecting Galway with points East. All other principal roads are displayed, from 3rd class roads up to National Primary Routes.

The international airport of Shannon is shown, as are the ferry routes to several islands, (including the Aran Islands) and the mouth of the Shannon.

The Wild Atlantic Way can be explored with this product, as the map reaches from the splendid Ballybunnion in Kerry to the equally glorious Bundoran in Donegal. The coastline between these two resorts cannot be adequately described here – Loop Head Peninsula, the iconic Cliffs of Moher, the wondrous Aran Islands, then to Galway Bay and the Connemara coast leading to the bewildering Clew Bay with its alleged 365 islands (yes, OSi HAS counted them – we’re neither confirming nor denying!).

Achill Island, pointing to America, leads to the North Mayo coast and Killala Bay, finally reaching beautiful Mullaghmore, after passing Sligo Bay where proud Benbulbin stands guard. Inland, a myriad of lakes, big and small, decorate the landscape, the largest including Lough Mask and Lough Corrib in Galway, Lough Conn in Mayo, and with Lough Allen and Lough Derg positioned on the mighty River Shannon. Mountains abound, with the Ox Mountains, Nephin Beg Range, and Tipperary’s Silvermine Mountains being notable.

The village of Cong, featured in the movie “The Quiet Man” acts as a portal into a wonderland of beauty between Galway and Mayo – Joyce’s Country and Connemara National Park where the Sheeffrey Hills, Partry Mountains, Maumturk Mountains and The Twelve Pins encircle Ireland’s only glacial fjord, Killary Harbour.

The richness of Irish culture is evident throughout this region.  County Clare is rich in traditional Irish music, particularly in Ennis and Milltown Malbay, while Conemara, Galway and Mayo have strong Gaeltacht (Irish-speaking) areas. Historical sites abound, perhaps most notably Bunratty Castle, on the N18 outside Limerick, and St John’s Castle in Limerick is also worth a visit, while Galway City offers a unique urban experience to the tourist.