Ireland East. This map covers the East of Ireland and contains detailed road information and tourist features, such as caravan parks, picnic areas and information offices. (This product is produced with the co-operation of Ordnance Survey Northern Ireland, OSNI). 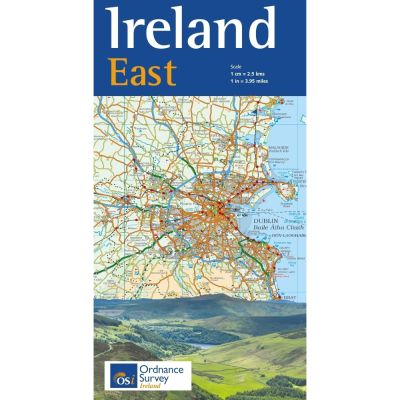 This map shows many Irish cities and towns, from Dundalk and Carrick-on-Shannon in the north, to Wexford, Waterford and Clonmel in the south. The Irish capital, Dublin, dominates the east coast. The entire road network is shown, from third class road up to motorway. The airport at Dublin is marked, as are the ferry ports at Dublin, Dún Laoghaire and Rosslare, whose routes and destinations are indicated. The Rail network is displayed, with stations marked. County boundaries are shown.

The River Shannon and Lough Ree feature prominently on the eastern map edge, while many notable rivers make their way across the map – the Rivers Liffey, Boyne, Suir, Nore, Barrow, and Slaney being notable, while a section of the Munster Blackwater can be seen in the south west corner. Counties Leitrim, Cavan, and Westmeath feature many small lakes, rivers and streams.

This map describes a primarily flat landscape, but some mountain ranges do raise their heads too. The Galty, Comeragh, Monavullagh, and Knockmealdown Mountains cluster along the south, while the Blackstairs Mountains, separating counties Carlow and Wexford, lead the eye towards the wonderful Wicklow Mountains National Park. The coastal traveller will enjoy exploring Tramore, Hook Head, the Saltee Islands, Dublin Bay. Carnsore Point, Curracloe Beach, Courtown, Arklow, And north via Clogher Head to Dundalk Bay.

Tourists will use this map to find their way around Ireland’s Ancient East, to experience hundreds of historic sites including the Boyne Valley, Drogheda, prehistoric Newgrange, Glendalough, the Rock of Cashel, Cahir Castle, Kilkenny Castle, Viking cities of Waterford and Wexford – too much to list here.