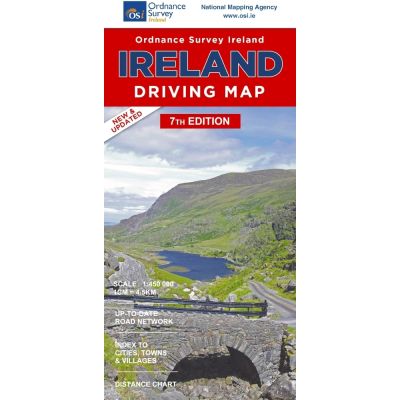 All motorways and major roads are shown.

Individual detailed inserts show city access routes to the major cities of Dublin, Cork, Belfast, Limerick and Galway. A useful index in alphabetical order in shown on the front of this map.

A Distance Chart is included for some of the major cities.

This top selling map gives an overall view of the island of Ireland.

Dublin has several ferry routes shown on this map and includes routes to the Isle of Man, Holyhead, Liverpool and Cherbourg in France.

Rosslare Ferry Routes are marked and include Fishguard Pembroke and destinations in France namely Roscoff, and Cherbourg.

There is a ferry Route from Cork to Roscoff in France.

Belfast has several ferry routes shown on the map including Cairnryan, the Isle of Man, and Liverpool.

Larne Ferry routes include the destinations of Cairnryan and Troon.

All the major rivers are shown and among them are the River Shannon, River Liffey in Dublin, River Lee in Cork, River Lagan in Belfast and the River Bann in Coleraine.

Among the many lakes shown are Carlingford Lough, Lough Conn, Lough Mask and Lough Corrib in the west of Ireland, Lough Leane in County Kerry, Lower Lough Erne and Lough Swilly, Lough Foyle and Lough Neagh in the north and Lough Allen, Lough Ree and Lough Derg along the River Shannon.

Major natural tourist attractions include the following; Glendalough and Laragh in County Wicklow, The Ring of Kerry and the Gap of Dunloe in County Kerry, The Cliffs of Moher, and the Burren in County Clare, Barnesmore Gap and the Giant’s Causeway in County Antrim.