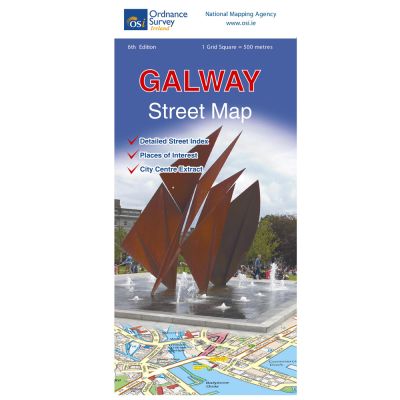 The Railway line comes along the bay into Ceannt Station in the centre of Galway city.

This map extends from Mionlach north of the city to the Claddagh and Salthill in the south. Ballintemple in the east and An Cheapach in the west.

A detailed street index included on the map.

The industrial and Business Parks are also shown.

There is a separate detailed insert 1:6,000 of the city centre giving more detail for the visitor and showing several weirs along the River Corrib.

The Corrib River flows through Galway city into the bay.

Lough Atalia is close to the city centre and the railway line crosses the lough before entering Ceannt Station.

Galway Bay with Hare island and Rabbit Island is shown along with Oranmore Bay.

Galway has plenty of tourist attractions for the visitor.

Amongst the popular attractions in Galway are the Spanish Arch area and the Saint Nicholas Cathedral. Galway also has a racecourse close to the city centre called Ballybrit Race Course.