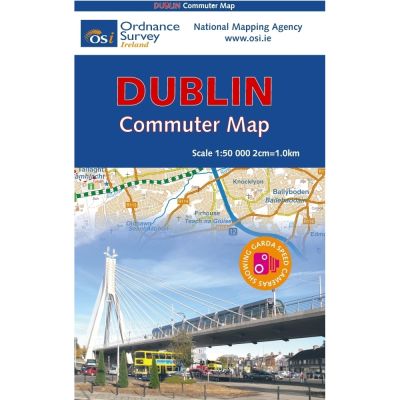 The Dublin Commuter map covers the M50 from Junction 3 on the M50/M1 interchange to Junction 16 and the M11 Bray Wexford Road. It also shows Dublin Airport.

The Dart line, Dublin Area Rapid Transit, is shown and extends from Howth in the north of the county to Dublin City centre and south to Shankill Station.

The railway line from the city centre to Donabate is marked.

Public transport routes are shown on a separate diagram and include the Dart, the Light Rail System called The Luas and Intercity Rail routes.

Dublin Airport to the M50 is included as a separate detailed insert along with Busáras and Dublin Port to M50 and Dún Laoghaire Port to M50.

Dublin Harbour is served by ferry destinations including the Isle of Man, Holyhead, Liverpool and Cherbourg.

The river Liffey flows through the centre of the city into Dublin Bay.

Bull island is marked on the map along with the island of Ireland’s Eye and Dalkey island.

This map is aimed at commuters and provides information on access to and from the city.