A detailed map of Dublin City Centre showing all streets, places of interest and much more. The reverse side shows a street index and map of Phoenix Park. 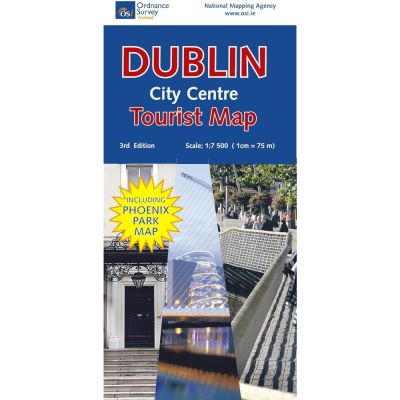 The light rail transport system called Luas, is shown on the map.

Pedestrian areas are located mainly in the city centre and include Grafton Street and Henry Street shopping districts and the traditional area of Temple Bar.

An alphabetical street index is included on the map.

The River Liffey flows through the centre of the city. Grand Canal Docks is also shown.

Dublin city has numerous attractions from parks to museums and the more traditional visitor attractions in the older areas of the city.

Among the parks in the city are St Stephen’s Green and Merrion Square.

The Phoenix Park, 1752 acres, is one of the biggest green spaces for recreational use in Europe. The herd of fallow deer have existed in the park since the 1660’s. Áras an Uachtaráin which is the residence of the president of Ireland is also in the park along with Ashtown Castle Visitor Centre and Walled Garden.

The various Places of Interest are marked on the map.