Wicklow North. The Adventure Series is an activity oriented map which shows detailed landscape information. It provides detailed mapping in specific locations for the outdoor enthusiast such as mountaineers, hill walkers, cyclists and other users of the Irish countryside. 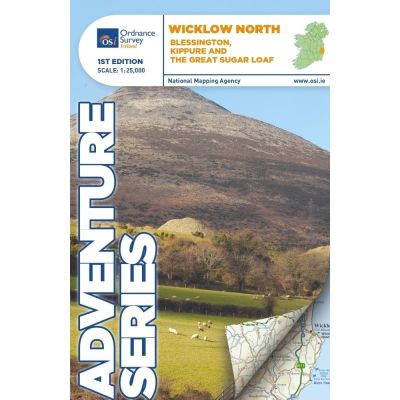 This map is situated in south County Dublin, a small portion of County Kildare and north County Wicklow.

A section of the southern end of the M50 is shown along with the M11/ N11. The N81 from Dublin to Blessington also features.

Wicklow North adventure map covers the key towns of Blessington and Bray. Among the villages shown are Enniskerry and Newtownmountkennedy and Ballyknockan.

The River Liffey rises between Kippure and Tonduff and flows through the Pollaphuca Reservoir.The source of the Dargle River is between Tonduff North and War Hill.  Other rivers shown are the Dodder River, the Vartry River, the Dargle River and the Glencree River. A feature of this map is the numerous brooks and among them are Slade Brook and Col Brook between Seefin Mountain and Kippure. Dealbog Brook, Boleyhemushboy Brook and Lugaculleen Brook are in the foothills of Mullaghcleevaun Mountain near Pollaphuca Reservoir.

Lough Bray Lower, Lough Bray Upper, Lough Tay, and the larger part of Pollaphuca reservoir and Glenasmole Reservoirs feature on the map. The Sally Gap features on this map along with part of Wicklow National Park.

The start of the Wicklow Way is shown on the map and also the start of Dublin Mountains Way.

Two Discovery maps 1:50,000 also cover this area with sheet 50 covering a small section of the northern part of the map and sheet 56 covering the midsection and the southern part.