Wicklow Central - Lugnaquillia, Glendalough and the Devils Glen. The Adventure Series is an activity oriented map which shows detailed landscape information. It provides detailed mapping in specific locations for the outdoor enthusiast such as mountaineers, hill walkers, cyclists and other users of the Irish countryside. 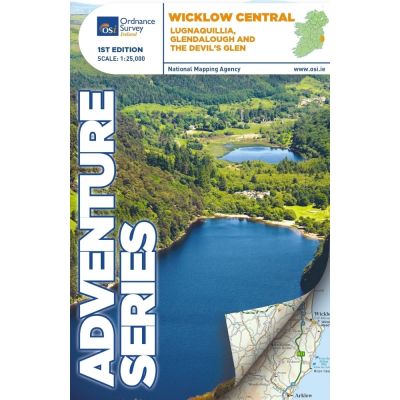 The R756 and R755 are shown on the map along with the railway line running through Rathdrum.

This map shows the towns and villages of Roundwood, Laragh, the Vale of Glendalough, Glenealy, Rathdrum, Ballyknockan and Hollywood. Lugnaquillia, the highest mountain in Wicklow, features on this map.

Mullaghcleevaun is the second highest mountain in Wicklow and on a clear day the hills of Wales can be seen from the summit trig point.

Among the rivers on this map are the Avonmore River, the Vartry River, the Glendasan River, Glenmacnass River, the Avonbeg River, the Slaney River and Kings River.

Part of Wicklow National Park is included on this map. The central section of the Wicklow Way is also shown.

Glendalough and The Devil’s Glen have much to offer with mountains, hills, valleys and historic monuments. Highlights of the area include: Glendalough Monastic Site, Glenmacnass Waterfall and Roundwood which is one the highest villages in Ireland.

Two Discovery maps 1:50,000 also cover this area with sheet 56 covering the northern part of the map and sheet 62 covering the southern part.