Ireland South. This map covers the South of Ireland and contains detailed road information and tourist features, such as caravan parks, picnic areas and information offices. (This product is produced with the co-operation of Ordnance Survey Northern Ireland, OSNI). 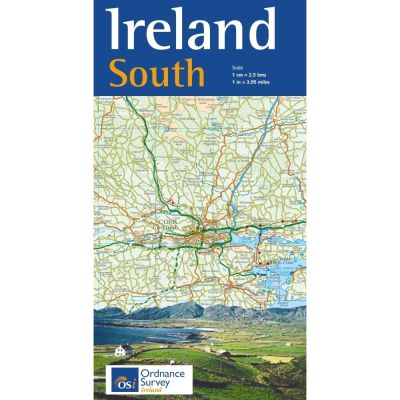 This map includes Cork City, Limerick City, and the towns of Dungarvan The County Waterford towns of Dungarvan, Lismore, Cappoquin are featured, while Cork County has the principal towns of Youghal, Skibbereen, Bantry, Mallow, Mitchelstown, and Fermoy. County Tipperary hosts Cashel, Caher, Thurles, and Tipperary town. Kerry has Tralee and Killarney as the main population centres.

Motorways are included; the M8 links Cork City to the midlands and Dublin, while the M18 briefly appears on the north edge, connecting Limerick City and Shannon International Airport to the West and North. All other principal roads are displayed, from 3rd class roads up to National Primary Routes. The rail network from links the east and north, with main stations  at Cork, Limerick, Killarney and  Tralee.

The coastline can be followed from Dungarvan to Cork City and on to Kinsale, the start of The Wild Atlantic Way. The N71 will take you through the glorious West Cork via Clonakilty and Skibbereen to Bantry Bay. Heading north through Glengarriff you can investigate the many beautiful bays and inlets of the Cork and Kerry coastline, including Dunmanus, Bantry, Kenmare and Dingle before reaching the mighty Shannon River. Munster is decorated with numerous mountain ranges; the gentle Comeraghs, the Knockmealdowns, the Ballyhoura  Galty Mountains all towards the east. As we move west and south, the altitude rises until we meet the Atlantic where the Shehy, Slieve Mish and Caha mountain ranges surround the stunning Macgillycuddy’s Reeks, dominating the Lakes of Killarney. Here, Carrauntoohil, Ireland’s highest mountain, proudly stands at 1039 metres. Rivers include the Shannon, River Lee, and the River Blackwater.

This map displays a wealth of points of interest for the holidaymaker, historian, or day-tripper, too many to fully list here. Key places of historic interest include Blarney Castle, Spike Island, Caher Castle and the Rock of Cashel. This map is particularly useful for exploring the many fishing rivers of Munster.