Ireland North. This map covers the North of Ireland and contains detailed road information and tourist features, such as caravan parks, picnic areas and information offices. (This product is produced with the co-operation of Ordnance Survey Northern Ireland, OSNI). 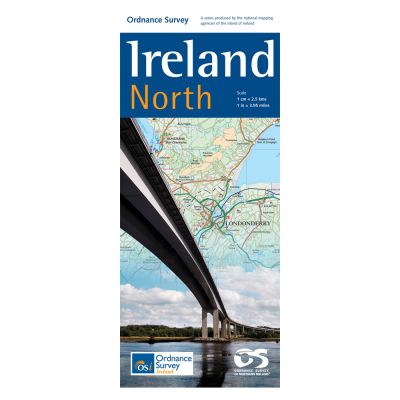 This map displays all the villages, towns and cities of Northern Ireland, including Armagh, Belfast, Lisburn, Londonderry and Newry. Principal towns in the Republic of Ireland are shown, including Letterkenny, Donegal, Sligo Monaghan, and Castleblayney. The entire road network is shown, from third class road up to motorway. Both airports at Belfast are marked, as are all the ferry ports, whose routes and destinations are indicated. The Rail network is displayed, with stations marked. County boundaries are shown.

Inland lakes, mountains, forests and spectacular bays fill this map. A myriad of smaller lakes fill the south and west of this sheet, from Lough Allen on the Shannon river in Leitrim and the island- bedecked Upper Lough Erne in Fermanagh to the largest lake in Ireland and the United Kingdom, Lough Neagh. Several mountain ranges can be explored with this map, including Co Down’s Mourne Mountains “sweeping down to the sea”, the Sperrin Mountains, the Blue Stack Mountains in Donegal and Benbulbin in Sligo.

The coastline is a continuous line of bays and peninsulas; Sligo and Donegal Bay in the west; the beautiful Inishowen peninsula in the north separating Lough Swilly and Lough Foyle; on the east coast, the Ards Peninsula encircles Strangford Lough, and Belfast Lough draws tourists worldwide for its Titanic legacy.

The Donegal Gaeltacht encompasses a geographical area of 1,500km2 and is the second largest Gaeltacht in Ireland.

Whether you are on a motoring tour or exploring cross-country, this map shows you how to get there. It contains a clear presentation of the road network. Tourist features such as tourist offices, official caravan parks, and picnic areas, are also shown. These are clearly marked and easy to follow. Planning your itinerary is therefore made as simple as possible. This product is produced with the co-operation of Ordnance Survey Northern Ireland, OSNI.