Discovery Sheet No. 84 covers part of County Cork and Kerry. The Discovery Series are designed for tourist and leisure activities and are produced at the scale of 1:50,000. 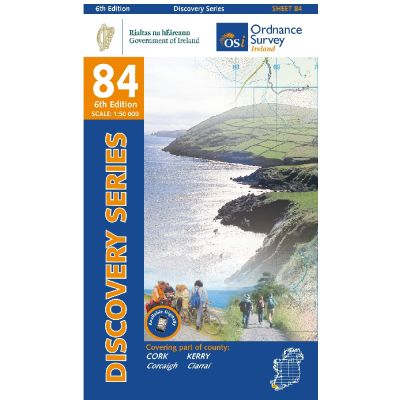 The N70 National Secondary road runs along the Kerry coastline passing through Sneem. The N70 also passes through part of the Gaeltacht area between Caherdaniel and Waterville. The majority of this map is serviced by regional and third class roads.

This map encloses some mountainous regions. The peninsula from Co. Cork is dominated by the Slieve Miskish Mountains and the Caha Mountains. Some of the higher peaks featured on these ranges include Hungry Hill, Maulin, Coomacloghane, Knockowen, Knockoura and Mickish Mountain.

Scariff Island, Dursey Island and Bear Island are the principal islands along this coastal map.

A number of walking and cycle routes are located around this map. The larger routes include both Béara Way walk and Beara Way cycle route, The Kerry Way and the Ring of Kerry Cycle Route. The smaller routes include the Dunboy Wood Loop, the Emlagh Loop, Sneem-Lomanagh Loop, Ardgroom-Pulleen Loop and a small portion of the Sheep’s Head Cycle Route.